Born in Maryport in 1929, second row or prop forward John Henderson fulfilled his boyhood ambition by 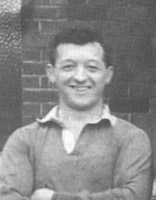 joining local club Workington in 1950, where he spent nearly 5 successful years. Coached by the legendry Gus Risman, during this period Workington won the Championship in 1950/51 and the Challenge cup in 1952, although John played in neither final. After representing Cumberland and England, he was selected for the 1954 Lions tour to Australia. The touring squad was the first to make the journey to Australia by air, and John played in 11 matches, including the infamous abandoned game against New South Wales. He was transferred to Halifax in January 1955 for £2,000 where, after initial reservations about the move, he settled to again became part of a fearsome pack of forwards. Apart from the 1955/56 Yorkshire Cup and League double, however, this Halifax side fell just short of winning major honours, suffering the heartbreak of losing in both the Championship and Challenge finals of that same 1955/56 season. John moved on to York in the 1958 season, making 50 appearances for the club before retiring from the game at the age of 30.