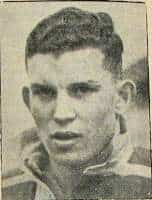 Born January 21st 1934 in Leeds, Mick Sullivan grew up during the Second World War. Although living in Pudsey he began playing Rugby League for the Dewsbury based Shaw Cross Boys Club. After a promising junior career he signed to become a professional with Huddersfield at the age of 18.

Mick settled quickly into top flight Rugby League and began to build a reputation as one of the toughest and most respected wingers in the game. A great finisher and tough tackler, he first won international honours for Great Britain as part of the squad that was selected for the inaugural World Cup in 1954.

After success in the tournament he became a regular in the Great Britain side and began to attract attention from Lancashire giants Wigan. In 1957 Mick moved across the Pennines to sign for

the Central Park based club for a then record fee of £9,500. Over the next four years he picked up winners medals in the 1958 and 1959 Challenge Cup finals and the 1960 Championship, although missing the final through injury.

At the start of 1961 he was on the move again, this time making the short journey to Wigan’s great rivals St Helens for £11,500,

another record fee. He played 80 times for St Helens and scored 29 times, which for an international winger at a big club could be seen as below par. But Mick played a more versatile role for the Knowsley Road club, often switching position in order to utilise his much feared defensive qualities.

After three years at St Helens, Mick moved on again to have brief spells with York and Dewsbury. Whilst at Dewsbury, he lead his side to the 1966 Challenge Cup semi-final, where they nearly caused one of the greatest upsets of all time against St Helens.

Riverina Rebels. As a result, he received a sine die ban from the Australian authorities, for playing without proper clearance, and returned home after breaking his jaw. Back in England he played briefly with Dewsbury, again, and Doncaster before returning to Australia, this time legitimately, where his playing days ended. He returned to England and coached for a time at Bradford Northern and Batley.