An enthusiastic supporter of Bramley Rugby League Club, Andy Coldrick now writes match reports as his contribution to the club. His memories of Rugby League date back to 15th of April 1968 when his father took him to see Bramley play Blackpool Borough in a match his local team won fairly comfortably. It was the first rugby

match he watched and Andy remembers it as a ‘binding memory’ through which his great passion for Bramley developed, although the team was never successful as near neighbours Leeds.

He joined the Royal Air Force after school, and for a long time was not based in West-Yorkshire. However, his affinity and loyalty to Bramley did not fade even during this period. With his family and friends support he received the latest news and f 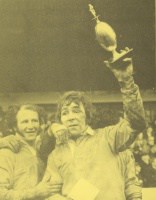 ollowed what was going on with the team.

In 1999 Bramley Rugby League Club folded and its supporters had to wait until 2003 for the club to be re-launched as it prepared to take part in the 2004 National League season. During these five years without the club Andy realised how strong his affinity for Bramley was. So, although the team was defeated by Sheffield Hillsborough Hawks in the first game after its resurrection, he was happy that he could watch Bramley playing again. Now the team is in a comfortable position within the National League, and he is committed to ensuring that the Bramley club’s future remains secure.