The Huddersfield Giants Study Centre is part of the Playing for Success (PfS) national learning programme which is based at sports grounds around the country. The scheme makes a direct contribution to the Government’s Children’s Plan (December 2007) and is aimed mainly at 10-14 year olds who are at risk of underachieving. The Kirklees PfS partnership has been set up between the Department for Children, Schools and Families (DCSF), Kirklees Council and five Kirklees based sports clubs: Huddersfield Town FC, Batley Bulldogs RLFC, Dewsbury Rams RLFC, Thongsbridge Tennis Club and Huddersfield Giants RLFC. 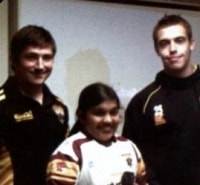 2008. In 2009 the RFL launched the ‘Black and Ethnic Involvement in Rugby League’ project, which is aimed at promoting diversity of backgrounds within the sport. The Study Centre is proudly supporting the scheme and Assistant Navjit Uppal explained:

“The Black and Minority Ethnic Involvement in Rugby League Project is an exciting new project from the RFL to highlight and celebrate the cultural diversity of rugby league players who are currently playing in the UK. Huddersfield Giant Study Centre pupils got the opportunity to meet and interview 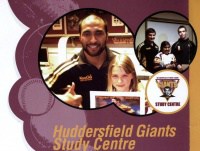 Huddersfield Giants players and staff from BME backgrounds about their heritage, cultural background and their rugby league careers. This was a fantastic opportunity for our pupils to learn about new cultures and to encounter firsthand positive role models from BME backgrounds.”

The centre has kindly given copies of the interviews to the ‘Up and Under’ Rugby League Oral History Project.