Nicknamed the Towoomba Ghost, Eric Harris is still the leading try scorer for Leeds RLFC. After joining the club from Western Suburbs, Brisbane in 1930 he stayed for 9 seasons, crossing the line 392 times in 383 appearances. Many of these tries were memorable, not just for their artistry but also for their importance and one such occasion came in 1938 in the Rugby League Championship semi final when Leeds played Swinton. Harris provided the decisive moment with one of his trademark try scoring efforts. Ken Dalby described the try as follows in The Headingley Story: Volume 1:,

‘..Eric Harris, whom Swinton must surely remember as the dreaded Towoomba Ghost, intercepted a pass between the Leeds 25 and the half way line. His devastating pace took him clear of all but Barnes the full back. Harris turned inside across him and the crowd cheered his stride as he went relentlessly to the Swinton posts to make Evan Williams conversion a mere formality. Harris, who had put paid to Swintons’ hopes of a cup final triumph in 1932, had snatched this game too out of the fire, and the Leeds supporters mobbed him joyfully from the field.’

Leeds won the match 5 points to 2 to set up a history making clash with neighbours Hunslet in the final. 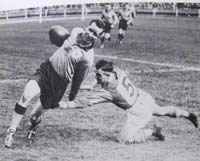