Ken Jubb and the 1938 Championship Final

Ken Jubb was one of the greatest second row forwards to play for Leeds. He joined from Castleford in 1933, aged 20, and enjoyed a 14 year spell at the club which ended with his retirement from the game in 1947. He unfortunately missed the 1938 championship final against Hunslet, one of the biggest sporting events ever to take place in the city, following his suspension for being sent off in previous game.

In the book Nothing but the Best, Ken Dalby paid him the following vivid tribute to Ken Jubb,

Highest today, Jubby! Resilient as an India-rubber ball, restless as a panther patrolling its patch, Ken Jubb was a rattling good forward, whose ‘party piece’ was a massive punt, occasionally way off target, that soared into outer space to the accompaniment of good-natured banter from Headingley’s South Stand. Moreover, from time to time, as an encore to one of his pile driving touchline cover tackles, he would slip in an acrobatic extra, cartwheels and flips being his speciality. We loved the guy!

Ken Jubb during a training session in 1947. 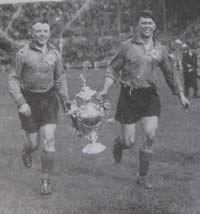 Jubb and captain Jim Brough on their lap of honour following the Challenge Cup final victory in 1936.