In their 80 or so years watching Dewsbury, Morris and Harry have great memories of many outstanding players.  Amongst those which stand out are:-

Frank Gallagher played loose forward for Dewsbury after the First World War and was one of the club’s few international players at the time, going on tour to Australia in the early 1920s. He became infamous amongst Dewsbury supporters for switching teams to arch rivals Batley just before one of their hotly contested West Yorkshire derbies. He went on to captain Batley to the league championship in 1923/24.

Rated by the Child Brothers as the best all round Rugby League player of all time, Vic was brought over from Australia by Leeds in 1937 and went on to make 145 appearances for the club, scoring 73 tries. Leeds paid the strong, skilful and elusive stand-off a then-record £1,400 signing-on fee to prise him away from Australia, but his capture was controversial for other reasons.

Along with other Aussie stars such as Earnest Mills and Ray Markham (Huddersfield) and Eric Harris and Jeff Moores (Leeds) Vic was seen as a major loss to the Australian Rugby League game. In frustration at the lack of quality in the Australian leagues and in the ‘Kangaroo’ touring side which lost to the British Lions in 1937, the RFL imposed a ban on international transfers which lasted until 1940.

He was later player/coach at Dewsbury from 1944-47, before playing nine times for Hunslet after his ship back to Australia was delayed. He continued to play in Australia, turning out and coaching for Parramatta, before going on to coach Australia to an Ashes victory in 1954.

Another key member of the great post-war Dewsbury team, full-back Jim kicked 1,560 goals during his career, the eighth highest of all time. Remembered by Morris Child for his catching ability, “he appeared to have suction on his hands!” he played at the time when full-backs had regular kicking duals during a match. Needless to say, Jim usually won.

He became perhaps most famous for being vice-captain of the British team that won the inaugural World Cup in 1954. Written off as no hopers before the tournament began, largely because most of the Lions team had withdrawn from the competition, Jim was able to stabilise a patched-up team and played in the 16-12 final win over France.

He left Dewsbury for a Rugby League record fee of £2,650 in January 1948, bought by Leigh. It was there he spent the next ten years of his career, making 336 appearances for the Lancashire side, scoring 1,043 goals – still a club record – and 36 tries. He was to finish up back at Dewsbury in 1959, where he played on for a further two years. His extraordinary connection with Rugby League continued after his retirement, when he proudly attended every annual reunion of the British Lions until his death at the age of 82 in February 2007. 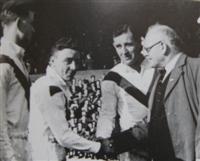 Jimmy Ledgard makes his Great Britain debut against New Zealand at Headingley in 1947.

The Dewsbury team which played in the 1918 Yorkshire Cup final. Frank Gallagher is standing on the back row, 3rd left.
Vic Hey (with the ball) is supported by Jimmy Legdard during match against Huddersfield in 1947